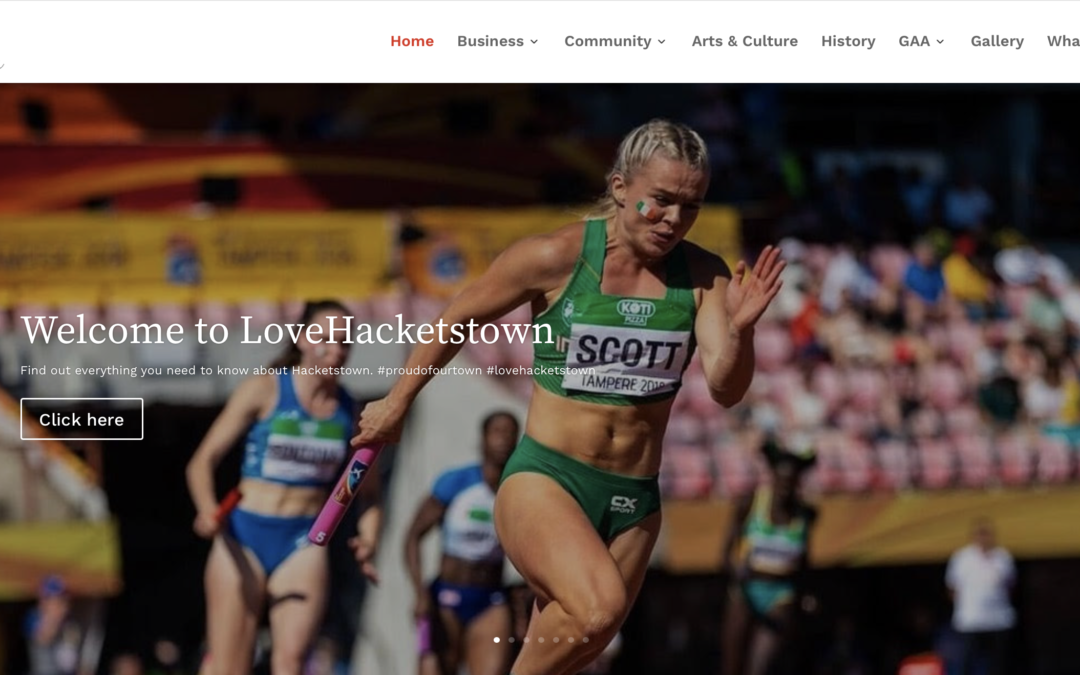 “The site promotes the town, its businesses, community groups, arts and culture, history, sport and weekly news,” explained Paula Butler from the LoveHacketstown group. Coupled with social media sites on Facebook, Twitter and Instagram, the new website provides a great sense of community and pride for everyone from the town and those who have fond memories of working, holidaying and visiting Hacketstown,” she added.

The idea was born at a community meeting held by Carlow County Development Partnership CLG just before the first lockdown. It was put to the meeting that funding was available to support the creation of the site and locals jumped at the chance to put Hacketstown firmly on the map. The journey began and LoveHacketstown was born.

Initially the social media sites were created and the first campaign ‘Hacketstown Heroes’ went live and got a huge response, creating hundreds of followers from far and wide. It gave people the opportunity to thank frontline workers from Hacketstown for their outstanding work during lockdown. People started to engage with posts as nurses, doctors, guards, care assistants, shop assistants and food suppliers and many more were nominated and appeared on the LoveHacketstown pages. The second campaign ‘connect with your community’ encouraged those who have left Hacketstown and are living abroad to get in touch and send messages back home.

The social sites received messages and images from Canada, Australia and the UK and were a warm welcome to those both at home and abroad.

Behind the scenes, the website was being created and Hacketstown was being discovered all over again. The history books were out, old images emerging, news flowing in and content was created. It was discovered that Mary O’Toole, who was born in Hacketstown, went on to become a judge and women’s rights activist, having emigrating to America at just 16 years of age. Mary died in 1957.

Old photos of Hacketstown from Dermot O’Brien’s two books of ***Old Carlow Photos*** and articles from ***Carloviana*** also provided a great source for the site.

An arts and culture section was created showcasing international musician Orla Fallon, illustrator Enagh Farrrell, designer Aoife O’Brien from Jando and many more, who all have their roots in Hacketstown.

The GAA, being an integral part of the community, created two pages on the website – Clonmore GFC and St Brigid’s LGFA – where images and updates on GAA activities can be found.

The journey of Shane Howard is also documented, with journalist Tom Byrne sitting down with Shane to discuss his football story, which included underage success with Ireland, having trials abroad and a big decision to move to America to pursue a scholarship.

“Another important reason for creating the site was to promote local businesses, community groups, schools and churches,” explained Paula. “A place where you can get contact details, directions, opening hours and much more for every business and amenity in Hacketstown. With over 55 business listed and 16 community listings, it opens up the services and offerings in Hacketstown to everyone at the click of a button,” she added.

“Anything that helps to bring the community together in these difficult times is worth doing and the LoveHacketstown website and social media sites is only the start of something great for Hacketstown,” said Paula.

Local companies sponsor the site each month, contributing to its upkeep and maintenance, and regular news and images are also uploaded. So the next time you are browsing, check out www.lovehacketstown.ie and find out all about Hacketstown.

The group is open to anyone who would like to contribute to the positive promotion of Hacketstown.