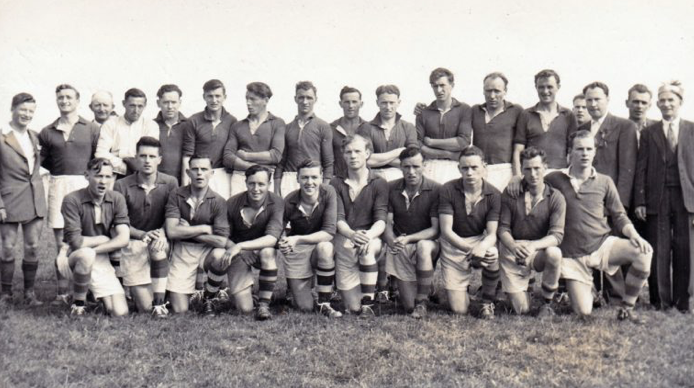 When local Gaels gather to talk about great Carlow players of the past, few can compare with the Clonmore colossus Paaks Connolly. Charlie Keegan reports

IN 1947, Hacketstown won their sole Carlow senior hurling championship when, in a surprise result, they defeated south county aristocrats of the game St Mullins by 2-4 to 2-2 in the final.

Winning that title did not, however, signal a wave of enthusiasm for the game of ball and stick in the Hacketstown area.

Instead, 1947 marked the year in which Clonmore Gaelic Football Club was founded by a group of enthusiastic Gaels, whose interest centred exclusively on the big ball game.

Clonmore GFC took off, making a significant breakthrough in 1950 when claiming the Carlow Junior Football Championship with a narrow 2-3 to 1-4 win over Muinebheag, who tasted junior final defeat for the second successive year, having lost to Shamrocks in 1946. Included in that 1950 Clonmore team was the club’s father figure John J Doyle, who went on to become Clonmore secretary for many years – a man who was the heartbeat of Clonmore GFC for more than 50 years.

The team also included 19-year-old Patrick (Paaks) Connolly, who was at the start of an outstanding football career as a defender. Throughout a distinguished career of some 20 years, the Christian name of the Hacketstown native was variously reported in newspapers as Pakes or Paks, but the Connolly family has confirmed that their spelling was always Paaks.

Paaks was born on 16 April 1931 in Pennyhill, Hacketstown to John and Frances Connolly. His siblings were Michael, Jay, Denis and Kathy.

The Connolly family were farmers and cattle dealers. Paaks was a hard worker and a great judge of cattle and sheep.

He married Alice Hackett from Tombeagh, Hacketstown, next-door neighbour to the Barry family – where patriot Kevin Barry lived as a boy for some four years while attending Rathvilly National School. Paaks and Alice had five children: Frances, Elizabeth (Liz), Patricia, John and Paul.

From the time he burst on the scene as a raw 18-year-old in 1948 until the late 1960s, Paaks Connolly was the outstanding Clonmore player of his generation at senior level. In a career spanning more than 20 years, he enjoyed success with the wearers of the red and green, was an automatic selection for his county over a 12-year period, won a Railway Cup medal with his province in 1959 and was an inspirational player at club and county level.