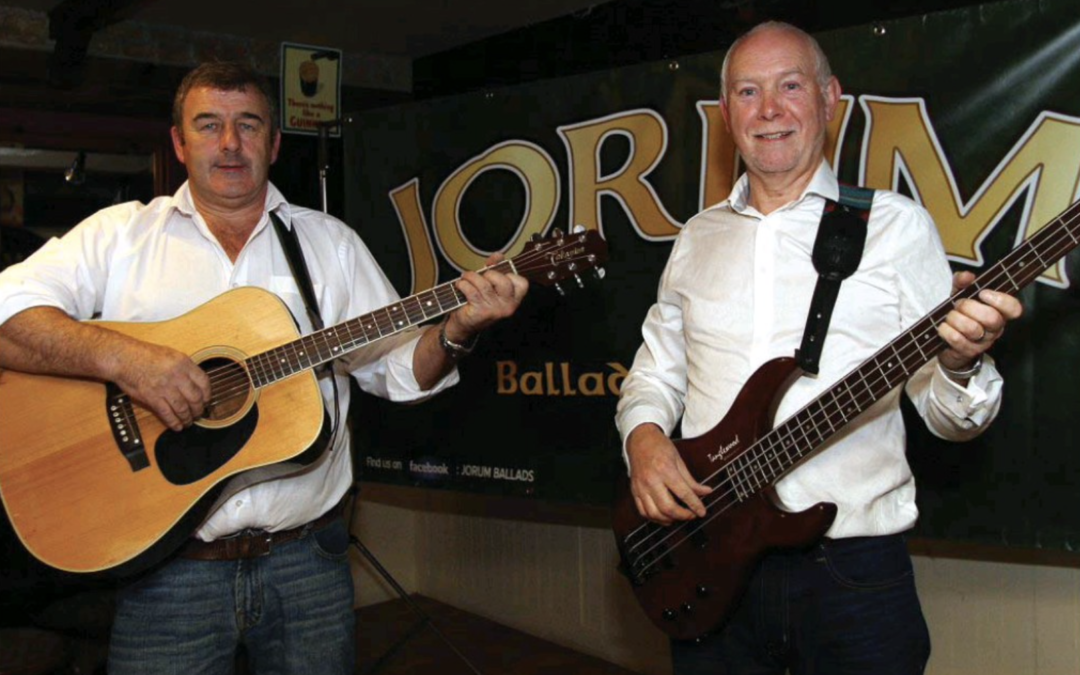 The popular Carlow folk group Jorum, they have been gigging for over 25 years. Playing live music has been a lifelong hobby and source of joy for Stephen Murphy, Hacketsotwn and Ger Cullen, Rathvilly.

The group formed in the early nineties with brothers Stephen and Paul Murphy from Hacketstown and Joe Fitzmaurice at the core. Soon after Rathvilly man, now living in Carnew, Ger Cullen joined and the foursome was complete.

‘We grew up in a musical house and my father was a great musician so naturally we picked up a love for music. His uncle, Tailor Roche was a great fiddle player and he played on RTE many years ago which caused great excitement at the time. We were always playing tunes or getting together for music sessions so starting up the band seemed like a good idea,’ explained Stephen.

Ger also started playing guitar as a youngster and when he joined Jorum was tasked with playing rhythm guitar. ‘I started off with rhythm and later moved on to bass. I enjoy both but the band needed a bass sound so I stepped in,’ Ger said.

Towards the early 2000s Jorum’s time as a four-piece drew to a close and Stephen and Ger found themselves as a duo but this didn’t bother them and they continued on as normal. ‘The other lads decided to give up the band but we wanted to continue so we just kept going as a two-piece. It was a very natural progression. It wasn’t a big decision to make as there was never any question of the two of us giving up,’ added Ger.

And so, Jorum continued gigging in all their usual venues from Boland’s in Hacketstown, The Lodge in Carnew to Molloy’s in Rathvilly and The Wagon Wheel in Knockananna and with every new gig they gained a few more fans. They also make a point of only playing one venue in any given town as a way of supporting a particular business and so that customers always know where Jorum will be on stage.

‘We started to get to know the people in the crowd and some of them would come along to all our gigs in different venues which added to the fun. We were able to have a bit of craic and a joke with them and dedicate a song to them when we got to know their favourites,’ said Stephen.

However, while their genre is mostly folk and ballads, Jorum still get the odd request for more unusual requests.

‘It is funny sometimes if there are younger people there and they come up and request something from someone we have never even heard of, and after us playing songs from The Dubliners or Christy Moore. We will always play something for them though,’ said Ger.

‘It is like playing to a room full of friends at this stage and we thoroughly enjoy playing music for people. It is great to be able to indulge our hobby and entertain others at the same time,’ added Stephen.